1969 Time for another REVOLUTION 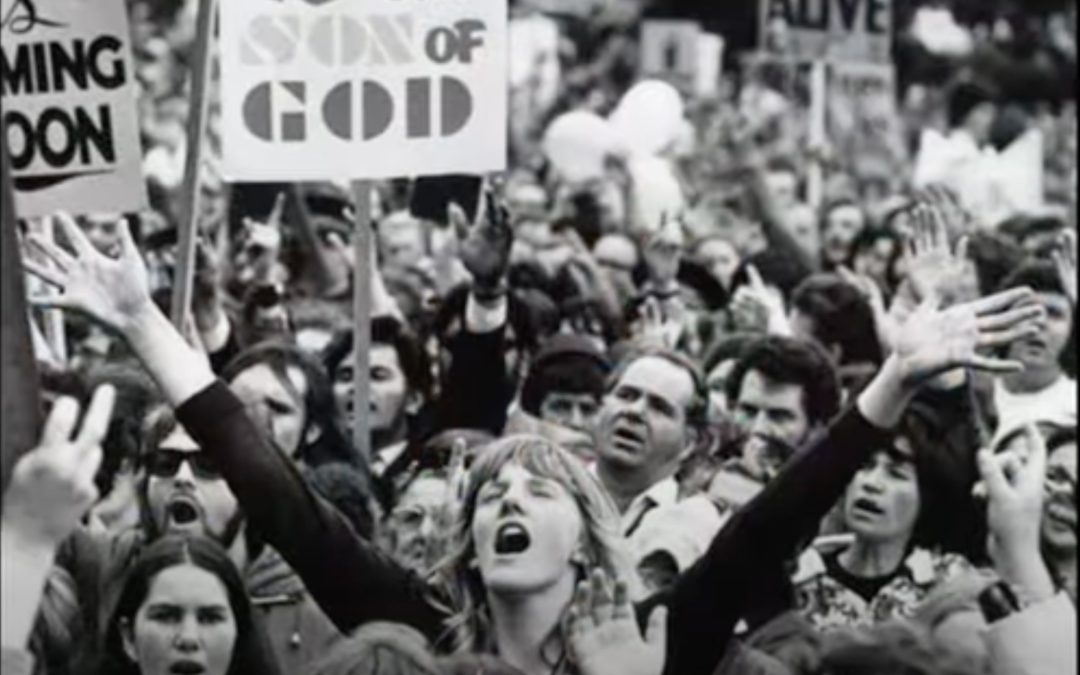 1969 Time for another REVOLUTION

The draft caught me in nineteen-sixty-eight, Fresh out of High School, with a short attempt at a college degree. The letter came conscripting me to fight in Vietnam. I was not too fond of jungle warfare, so I enlisted in the Navy; I figured it was safer to serve at sea, with reduced odds of death by bullet or bomb. A small-town North Dakota boy is about to be awakened to the world’s realities. Two months as a recruit in San Diego boot camp, six months in Tennessee training to work on Phantom jet fighters, and a ten-day road trip back to San Diego through New Orleans and the Mardi-gras, I found myself at Naval Air Station Miramar for what would be the next three years.

I have a hard time calling myself a Vietnam veteran; I never saw Vietnam. I spent four years in the Navy and never a six-month cruise on an aircraft carrier. Instead, I assumed a new identity as a hippie during the radical times of the summers of love. The Navy allowed beards and hair down onto your collars, making it easier to transform into a hippie after leaving the base. My small-town identity vanished, and the summer of love moved in; I had a split personality: sailor by day and a pot-smoking hippie by night. 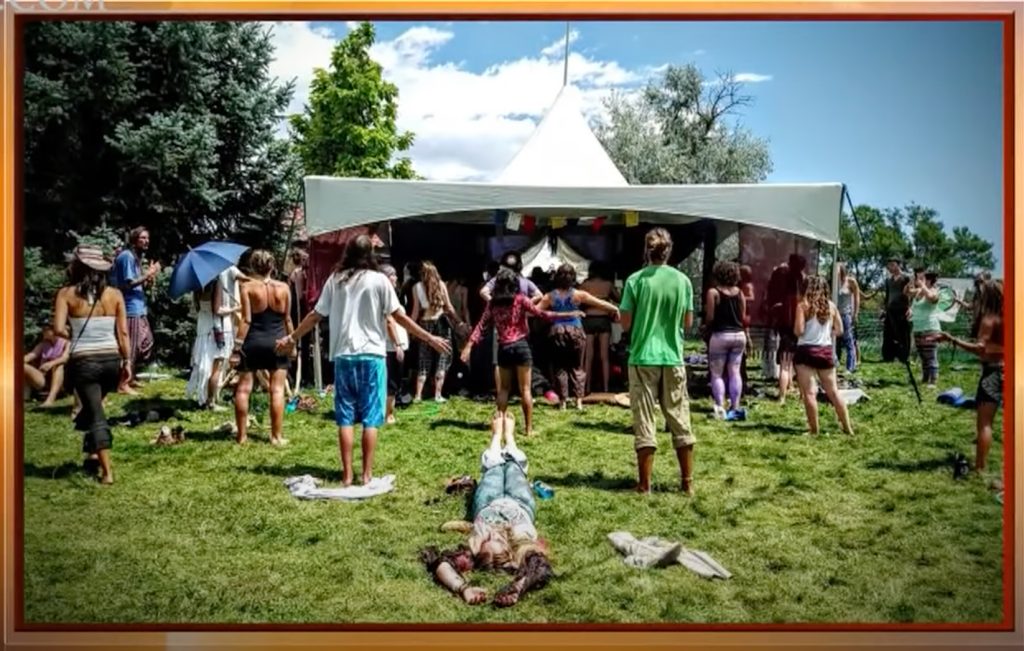 It was cool to commune, so I communed with friends from the base in a series of houses in Poway, Escondido, Encinitas, and Ramona. Strangers would come, stay, and go. I would often come home and not recognize someone, ask their name, and typically find out someone from our place picked them up hitch-hiking. The population of our communes was an ever-changing tide—one of the hippies that stopped by triggered an FBI raid, and another introduced me to the “Jesus Freak” movement. I never became a “Jesus Freak” during the California summers of love; I know now Jesus did keep me out of jail. Three years later, I was discharged and returned to North Dakota. Upon my return, a friend reintroduced me to Jesus and dunked me in the Holy Spirit.

The time in California became a distant memory, and I concentrated on the roller coaster called life. Nearly fifty years later, I consider myself Christ’s disciple, eager to share the good news of salvation. Yesterday while watching YouTube videos about cinematography and photography. I saw a popup ad for a teaser for an upcoming movie called “The Jesus Revolution,” you can check it out at the link below.

This movie teaser blasted me back to the summer of love. The flashback was intense; I could smell the pot-filled salt air and hear past travelers’ voices. I regret not becoming a Jesus Freak back in 1970. But as Paul Harvey would say, “And now for the rest of the story.” Christ planted a holy restlessness and awareness of His grace in me early. My father died in a head-on collision trying to get home after 700 miles selling auto parts all week. My grandfather became my guiding light through grade school and into middle school. Grandpa Stephen died of emphysema as I entered puberty. The mentoring of this storm-centered boy then came from grandma Edna, the Lutheran, and grandma Caroline, the Catholic. Both loved Jesus and the hope he gifts to us all. Grandpa Stephen, Edna, and Caroline gave me a hunger to know more about this Jesus fellow. When it was time to decide where to attend school after the sixth grade, I was called away from public school and enrolled at Bishop Ryan High School, a catholic parochial school; there were no Lutheran schools in Minot.

At Bishop Ryan, I confessed my multitudes of sins every Wednesday and attended Mass on Thursday. I finished three years, and just as I started my senior year, I decided if God forgives sin, why do I need a priest as a middleman? So I told the priest my intention of confessing only to God directly—this statement got me immediately expelled from Ryan High and nearly excommunicated from the Catholic Church. I then went on a five-year sabbatical from Jesus. I thought if I can’t talk to God directly, what is the point of it? A seven-year hedonistic life followed, then that Jesus freak showed up at my kitchen table. Heck, he could have been Jesus himself. 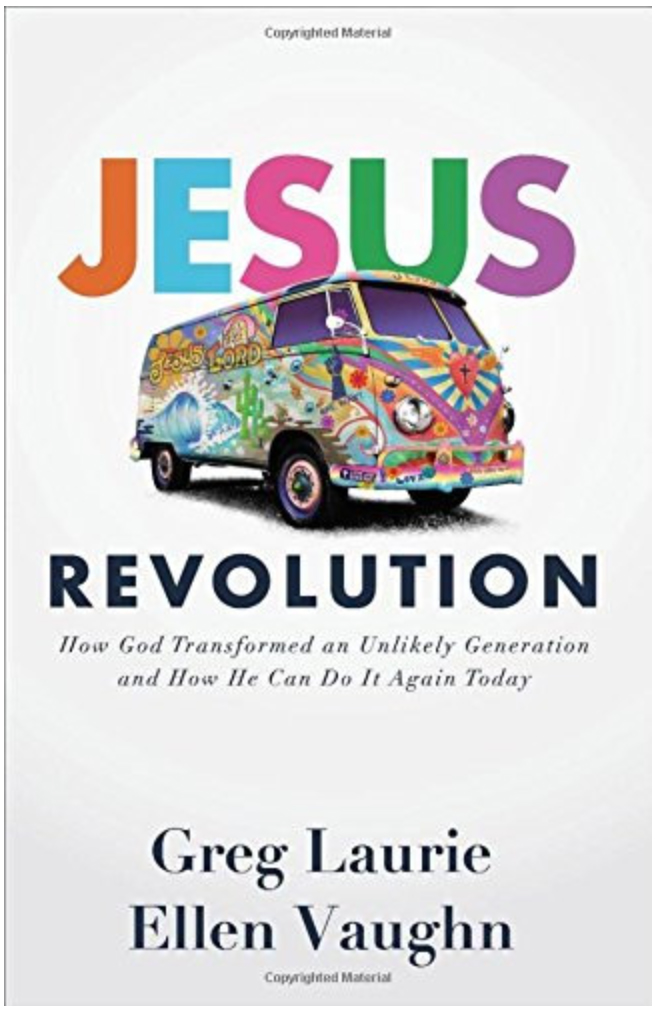 The Jesus Revolution movie is based on a true story about the Jesus movement, Jesus freaks of the sixties and seventies, and what the Lord did in those times in a little church called Calvary Chapel. The house ministries and communes for Christ started in 1968 in the Blue Top motel. Lonnie Frisbee and his wife Connie were hippies from Haight Ashbury who came down, and the pastor of Calvary Chapel, Chuck Smith, invited them to be youth pastors. Lonnie was a powerful preacher that eventually fell from grace. The drugs and lifestyle of Haight Ashbury haunted Lonnie Frisbee until his death. The Bible tells of mighty men of God who sinned big time: Moses was a murderer, David with Bathsheba, Solomon, Sampson, and The Apostles all fell short. Broken people restored is the good news of Jesus, who died for all sinners, all the broken ones. The  Jesus Movement of the sixties and seventies was not without turmoil and dissent that one can point at and say, “What a bunch of hypocrites.” We all have witnessed some deceitful priest, pastor, or church, be angry at them, the church, or even religion, but don’t blame God.

Psalm 34:18 The Lord is close to the brokenhearted and saves those who are crushed in Spirit.

Today there are over 1400 Calvary Chapels. A tiny, more diminutive than a mustard seed, can grow in the light of God and bear witness to God’s Providence, omnipotence, and love for humankind. The Bible is a love story, the greatest ever told from Genesis until this moment. God pursues man’s love, the love of His children. God made a covenant with Abraham and can only fulfill it as He has always intended. As prophesied in scripture, God’s plan for man will be complete, possibly very soon. There will be an eternal abyss between the love of God and those who chose darkness. It is decision time on what side of the chasm you want to be.

The 2022 world is in dire straights, filled with anger, division, political controversy, and a move to throw God out to do a global reset. Fifty-four years ago, the flowers of the flower power movement fueled a movement back to God. I am calling for a revolution again, a Jesus revolution to spread as wildfire across America and the world. God’s Spirit calls us to the fruits of Love, Joy, Peace, Kindness, Gentleness, Meekness, Self-Control, and Long Suffering. I cannot imagine a world without these attributes. It would be Hell, the loveless place across the abyss in darkness forever.

As Hell busts out across this world, we can start a Jesus revolution that will spread truth and discernment throughout America and get us back to “In God We Trust” again. I have seen it starting in the most unimaginable places here on the prairie: On a 23-acre farmstead near Milo, North Dakota, called “Fathers Farm,” that ministers to broken men, In a revival tent in a just-hayed field on Chippewa tribal land in Dunseith, At the “Chief Little Shell” Powwow as Native American’s dance unto the Lord, and in small group house ministries across this prairie. Truth is busting out, and the light and fire of God are beginning to blaze—it is time for revolution; it is time for a Jesus Movement! Jesus said Knock, seek, and you will find—I implore you all to start Knocking, read scripture. Get ready for different–“Let light shine out of darkness,” 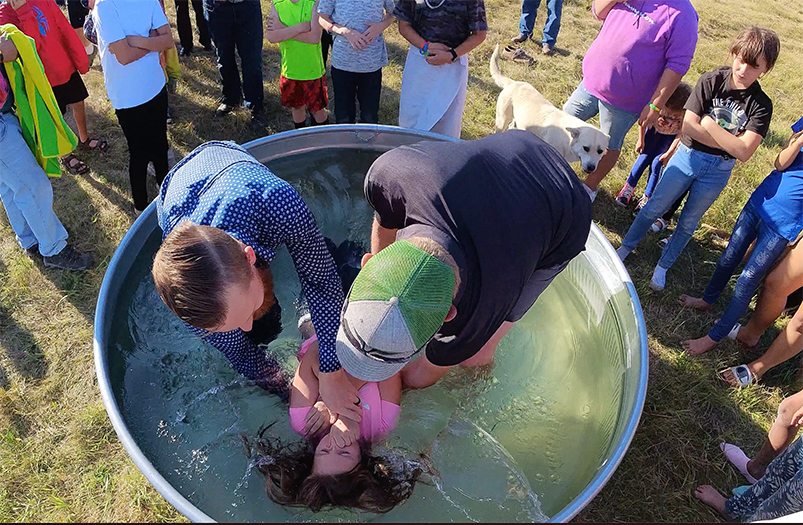 Baptism in a cattle water tank 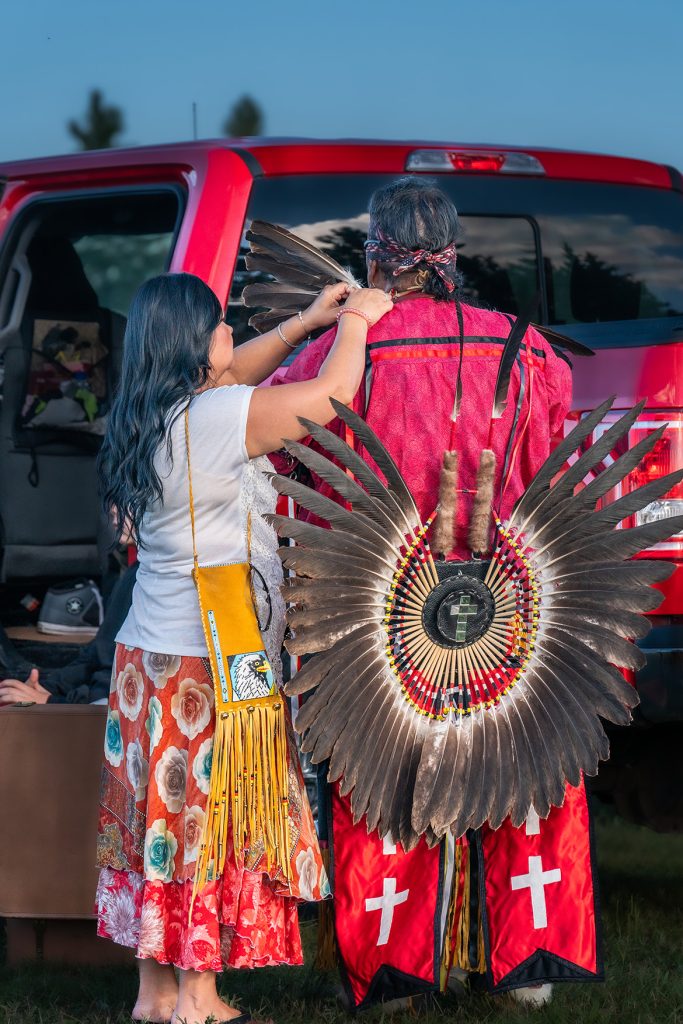 Dance onto the Lord