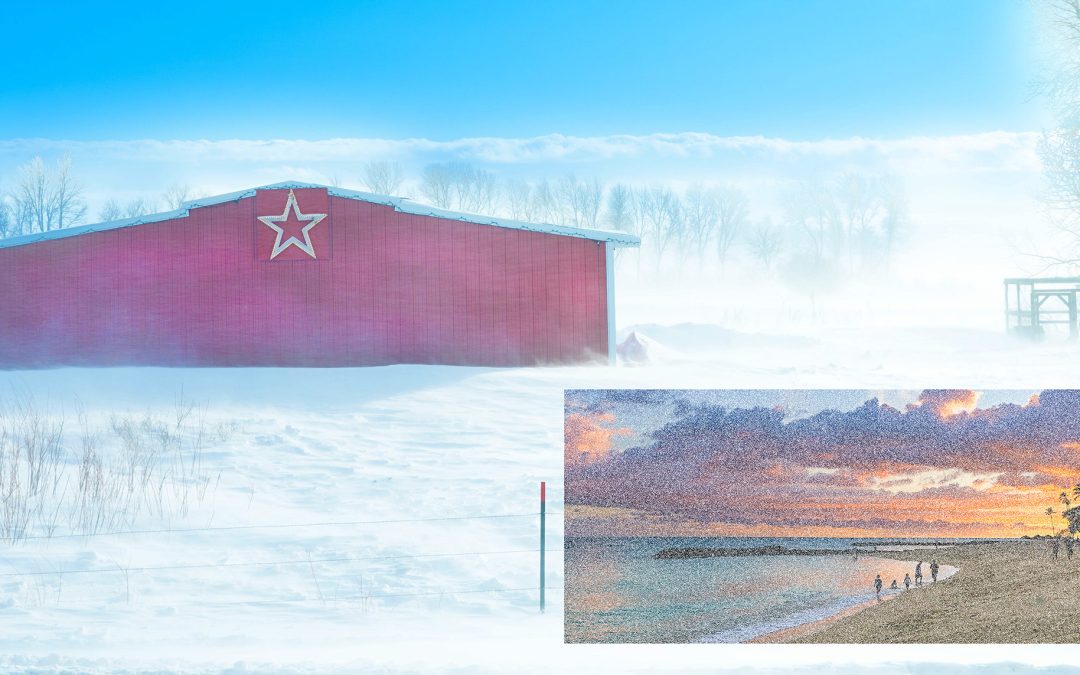 I can hear the weather moaning outside; our deck cracks, moans, and groans as it contracts; I throw a log into the stove and pour a steaming cup of coffee; at five in the morning, the darkness hides the white landscape. Winter is here for three weeks more, then the color returns. I often joke that I am an adopted Canadian, living a half-mile from the border. I linger on childhood memories with best friends in border towns, legally drinking Molson beer at eighteen. In 1966 we quickly crossed the checkpoint between Canada and America; we did it ten times a night, traveling between a local dance in the US and constant trips to the small Canadian pub for refreshing beer and back. Today the border is locked requires a passport to enter.

I love the fun-loving uninhibited attitude of my friends to the North. In Canada, the sport of Curling is second only to Hockey. A Curling tournament is called a “Bonspiel,” where the beer flows after a day on the ice, and men dance in tidy-white underwear with an ice cream bucket over their head atop a table singing “O Canada.” Up North, we are a different lot, a hearty group where we spend frigid days concocting alcoholic beverages with names like “purple moose milk” and a sip of Caribou from an ice glass is routine. We joke that the water here is very hard; it’s three feet. In my life, I have seen the cold plumes to sixty below zero Fahrenheit—we say that will keep the riffraff away.

The voyageurs were 18th and 19th century French Canadians who engaged in transporting furs via canoe during the peak of the North American fur trade. The symbolic meaning of the term applies to places and times where transportation of materials was mainly over long distances. Every winter since 1970, Saint-Boniface, Winnipeg’s French quarter, is transformed into a winter paradise and becomes host to the largest winter festival in Western Canada celebrating Voyageur, Métis, and First Nations histories. The Metis are people of mixed blood—the French voyagers adored the first nations of the Ojibwa, the original people, and mixed blood. “Michif” is spoken by Métis peoples mainly in Manitoba, Saskatchewan, North Dakota, and Montana. Michif is primarily a combination of Cree and French, but the language also borrows from English and other Indigenous languages, including Ojibwe. Michif is considered an endangered language.

Norwegian immigrants arrived in North Dakota in the1870’s. They settled in the eastern and northern parts of the state. Because of the lack of farmland in Norway, the Norwegian immigrants sought the superb fertile farmland of North Dakota. Some immigrants had spent a few years in other states before they finally arrived in North Dakota. I believe they chose North Dakota because it has the perfect blend of warm, rich soil and cold winters. Hearty people living in houses made of sod warming by fires fueled by buffalo chips—it is then hardened dried shit from buffalos. Trees were scarce, and buffalos roamed as a mass herd. Most settlers lived a subsistence life; hunting, fishing, farming, and ranching. The fur trade brought commerce to the Dakotas; the railroad brought respectability and greed. Towns grew up separated the distance a train could travel before needing fuel and water for the boilers—churches sprang across the prairie every two hours of a buggy ride from those towns.

These are the roots from wench I came, the Viking, Ojibwa, Metis, and French—I am a mutt, a strange mix of a junkyard dog, and proud of it. God placed me here for a reason; this is why I returned after twelve years of tropical living in Hawaii. I missed the excitement for changing seasons, the smell of rich loam dirt, and the hillbilly hello. A place where people love God and one another. A place where we will travel a long distance to help one in need. We eat heartily in a land of Sunday church dinners of turkey, meatloaf, Lutefisk, Lefsa, even Galette, and fry-bread. Home-made is North Dakota; we don’t order our groceries online. I returned to this warm, loving harsh living grassland because I am a Viking who will wither and die in an urban jungle. But why the heck leave the paradise of Hawaii, Hawaii is not my home and Hawaii is not all paradise.

What does this have to do with teaching an old dog new tricks? It is the framework that built the character and paved for this writer’s experience. But I am not a writer; I failed English and Literature. My spelling and vocabulary are atrocious. I can tell a story, but writing it is a world unaccustomed to me. I am exposing my writing and myself to criticism; why? I was born without a creative bone; I cannot draw, paint, and failed every attempt at music; the trumpet, piano, guitar, and drums. Yet I am attempting to tell visual stories with photography and videography. Young creators intimidate me with their talents. Why is my blog called words and pictures? Despite all rational reasoning, why would I place my attempts to write and be creative out into the world when it is obvious I am an introvert who lives a sequestered life far from the hustle and bustle of the creative capitals of New York and Los Angeles?

I feel ill-prepared and unqualified in the creative world; I can relate to the story of Gideon. Gideon was threshing wheat in a winepress, afraid of the Midianites. Suddenly the angel of the Lord appeared to Gideon, and he said, “The Lord is with you, mighty warrior.” I imagine Gideon saying, “Lord, I am a fearful man, not a great warrior—You dialed the wrong number.” I feel like Gideon, God, You dialed the wrong number. You must be trying to reach a young talented writer and photographer, not this old, set in his ways dog. This old dog’s “Calling” came on August 8, 2018, when I started my Journal. After three years and just over six months in the creative crucible, I can say you can teach an old dog new tricks. The goal is not to be a master photographer, an Oscar-winning cinematographer, or a Pulitzer prize-winning writer—it is just to tell good-news stories of kind people and beautiful places. Good news and beauty are what we all need in trying times.

What have I learned in the past forty-two months? Plenty, all along feeling a bit like Sisyphus trying to roll a new trick up the hill for it to roll down into the “I told you so” critics. Failures became my life, and I ate the humble pie until it made me ill. I have written nearly a million often misspelled, poorly syntax, and grammatically incorrect words in sentences. I took over hundred-thousand images searching for the right artistic formula to wow the viewer. I have struggled to understand the technology, rules of composition, lighting, and editing photographs and videos. I stumbled about in frustration how to use software to enhance the images I take videos I made: Photoshop, Lightroom, Final Cut Pro, Motion, Compressor, and PhotoPills. I researched gear from cameras to drones, the tools needed to tell the stories. YouTube was my mentor; I watched hundreds of videos from young creators on storytelling, photography, and videography. But the primary wisdom I gained in this effort is not about me or my capabilities—it is about telling the truth, as good stories using words and pictures, the best I can.

We purchased a used small twenty-foot PleasureWay RV we affectionately named Lucille to begin our travels. Then realized we needed to build a garage big enough to keep her safe. The garage building for Lucille is to be my training ground for documentary videography.

The saying is, “if you wait for perfect, you will never accomplish anything,” and the follow-on is “Just Do It!” I have a list of stories to tell; I need to establish a YouTube channel, write the scripts, shoot the video and take the still photos and begin releasing them to spread the good news in hopes of encouraging others to escape the fear of trying. I hope those young creatives will critique this old dog attempting new tricks.

The primary lesson I have learned on this quest is not to boast about likes or accolades, YouTube silver or gold plaques, or money. I am a blessed old dog that does not need any of it. But if the words and pictures could encourage and give hope to even one of the good news of the resurrection of Jesus—the effort is worth every hour spent trying.

Episodes 1,2 &3 have all the bulk content of pictures and video, the scripts need writing and the words published. The titles will be: