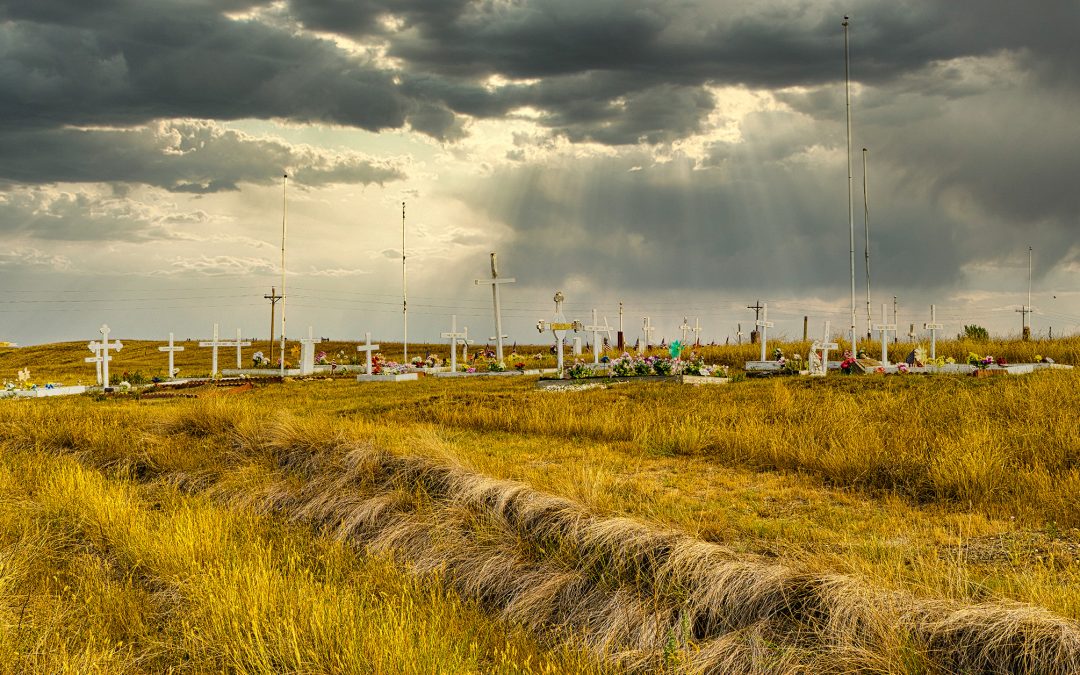 Three rivers flow into it: The Madison, Jefferson, and the Gallatin, near the town named Three Forks in Montana. After the confluence, it becomes the Missouri River; it is America’s longest river, a hundred miles longer than the Mississippi. Fifteen times we dammed the flowing waters of Mighty Mo. On our recent travel, we explored small portions of Missouri on our return from Council Bluffs, Iowa. We crossed the Missouri several times; our final crossing was between Bismarck and Mandan, North Dakota.

The five days we journeyed the Lewis and Clark trail has five great stories to tell—today’s story is about the heroes of a small nondescript cemetery eight miles out of Mobridge, South Dakota. A cluster of white crosses, American flags, and flagpoles occupying the hilltop location; the whispering grasses called this story to us. It is a veterans cemetery—unlike the typical veteran’s cemetery with identical grave markers aligned perfectly in all directions; this cemetery had character, told the story of the brave men resting there, and oozed of love of God and Country. 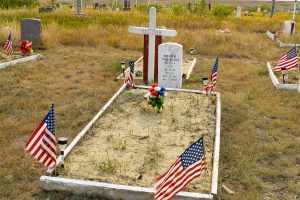 Patrick Two Bears served in both the US Navy and Army and fought in the Korean War. Sadly that’s all I know about Patrick, just what is written on his headstone. The markers and memorabilia showed the love and appreciation for Patrick and all the brave soldiers in that cemetery. Graves neatly kept adorned with solar lights, flowers, American Flags, personal memorabilia, and notes from loved ones. No federal funds tainted this hallowed ground.

We walked amongst the fallen, and the spirits below told the story as if we had lived with them. Why did this place call to me? It reminded me that courage has no skin color, and the pride to serve America bridges all men and women regardless of origin. Of all the people who should be angry, disappointed, and vengeful at America, it should be the Indians, the red man, the original people of North America. We are the Europeans who invaded their home, occupied the land they held sacred and forced them onto the reservations. We flooded their valleys along the Missouri. We did our damnedest to erase their culture and obliterate their language. A building at 700 Pennsylvania Avenue in Washington DC; is filled with broken promises—the treaties we made with our brothers.

Yet in this beautiful place high upon a hill nestle in the prairie grasses is a few hundred stories of the natives who died to defend America—one would ask why? The five days we

I am Home in Fathers Arms

have been on the road, the airwaves immersed our quiet with anti-liberty, anti-freedom, and anti-American rhetoric. It is an America I no longer recognize—victims, instead of a grateful nation—fear panicked people, instead of In “God We Trust”—chicken littles running about screaming, “the sky is falling, the poles are melting.” Our politicians resting calmly at Camp David pull the plug on promises made without a sensible withdrawal plan leaving Americans and Afghani’s and people of many countries in peril because of a swift unplanned, poorly executed withdrawal of troops. What do they say? We never thought the Taliban could move so swiftly—yeh, you never thought!

The statement has changed to say goodby to these fallen soldiers and morn with their families—it now reads, “On behalf of an ungrateful nation, we are sorry you child died defending freedom.” We took some time to say a prayer of thanksgiving as we walked among the proud and brave with the red, white, and blue straining against the wind. Go out today and thank a veteran for their sacrifice—Go out today and thank God for giving them the courage to enter the freedom battle. It is time for everyone to stand firm for freedom, it is time for civil disobedience, it is time for term limits of all politicians.

From our grateful family—We praise God for living in America under her freedoms and say, “Thank you, Patrick Two Bears, Thank you to every Veteran.” 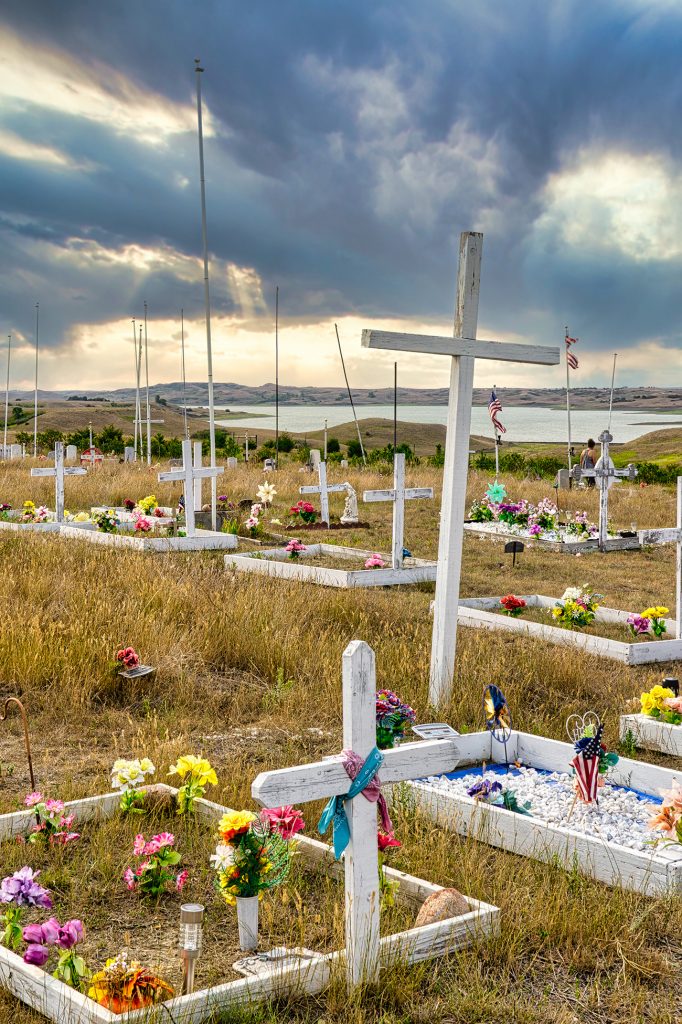 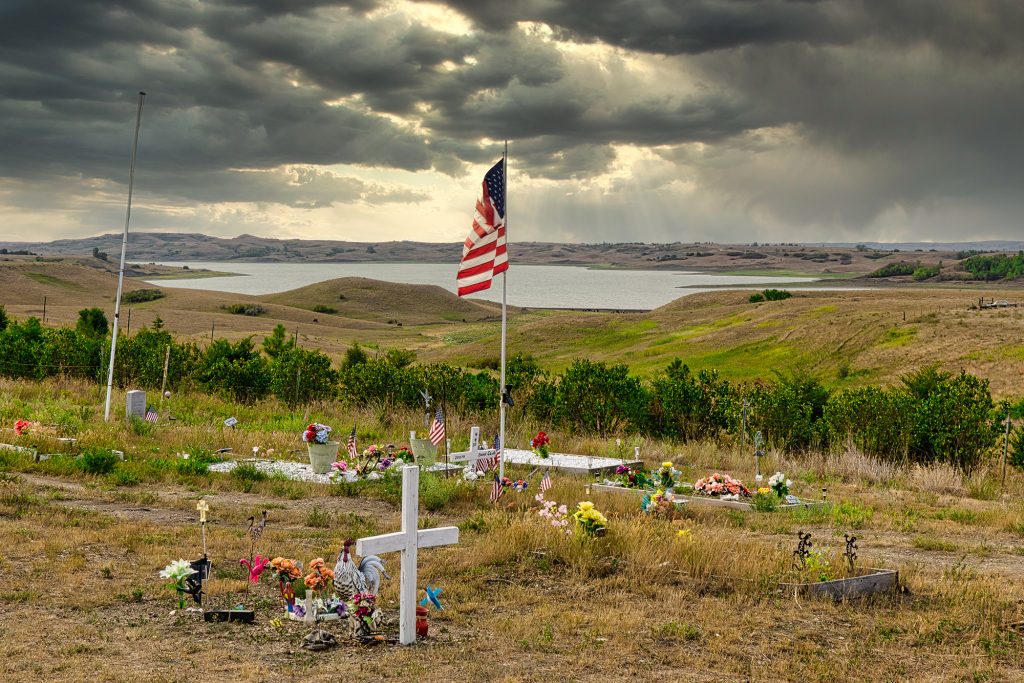 Thanks from a Very Grateful Nation